Installing BizTalk Server properly will require you to make some changes to the SQL Server Configuration as well. Specifically, you might want/need to disable the Shared Memory Protocol.

The SQL Server Shared Memory Protocol per the MSDN documentation around SQL protocols:

Basically, in the case your application is not hosted on the same server as your SQL Database Engine, it makes zero sense to enable the protocol. Therefore, it is considered good practice to disable the protocol and only enable the Named Pipes and TCP/IP protocol:

While the above has been a good practice for many years and many different BizTalk versions and never gave us any issues, for SQL Server 2016 this meant that the SQL Server Agent (windows service) was stopping unexpectedly. Something that came to my attention while trying to configure the BizTalk SQL Jobs.

(Re)starting the SQL Agent service works fine, but after about a minute, we get the same issue and the service crashes.

After some google-Fu, I finally managed to find the culprit due to a message in the SQL Server log:

And with some further research, it seemed the ODBC version that ships with SQL Server 2016, which is ODBC v13.0, contains a bug that will prevent the SQL Server Agent from running with Shared Memory disabled!

To check the version of the ODBC drivers on your machine, there is actually a page on Microsoft Docs: https://docs.microsoft.com/en-us/sql/database-engine/configure-windows/check-the-odbc-sql-server-driver-version-windows

We now need to upgrade ODBC to version v13.1. You can download ODBC v13.1 from the Microsoft website: https://www.microsoft.com/en-us/download/details.aspx?id=53339 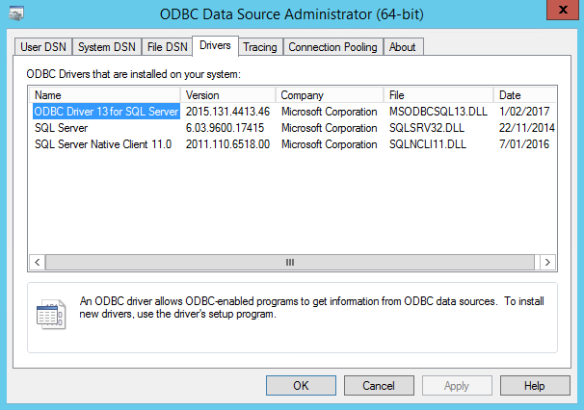 And, as expected (and hoped), the SQL Server Agent service now start successfully and keeps running: 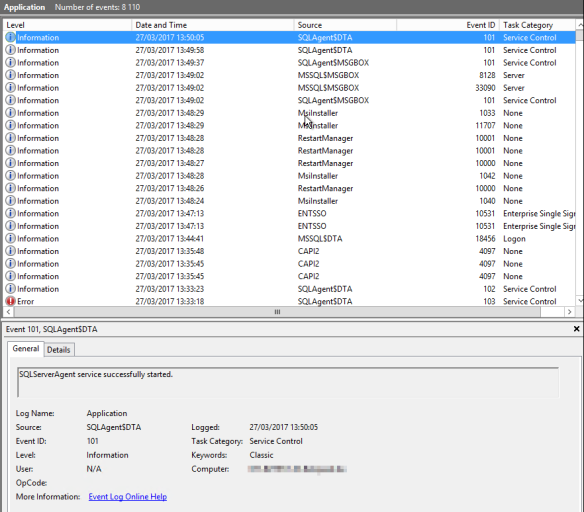 Let me know if this helped you or if you have any questions.